Rough times made it difficult for Chelsea to complete high school, and even though she knew she had the ability to get her diploma academically, she found herself making the decision to drop out. So when she saw a flyer about Santa Maria’s GED program in May of 2010 and convenient hours at which the program was offered, she signed up and began attending classes right away. This step was only the beginning of Chelsea’s long road to success.

During her GED classes Chelsea was invited to attend Employment workshops at Santa Maria, where she gained a wealth of information she still utilizes today. “I wouldn’t even know how to do a resume if it wasn’t for them, said Chelsea. “I updated my resume not too long ago, and thought: ‘Thank God, Santa Maria’s Employment Coach helped me do that.’”

Young and willing to work, Chelsea was able to find employment very soon, but then something special happened in her life that changed her priorities. “I had my daughter,” said Chelsea. “And that was kind of hard. I wanted to be like that mom that was there all the time and [saw] every first accomplishment.” Amidst all the delights of motherhood, Chelsea found herself thrust into the role of a single working parent, and Santa Maria was there to help at every new step.

“They reached out to me at the hospital when I gave birth to my daughter.  I was 20 years old, and I don’t have younger of siblings to know what children are like.” Chelsea explains how Santa Maria’s Every Child Succeeds program followed her and her daughter over three years, checking in twice a month, providing her with information about constructive play and what to expect from her child at different stages of development. “I wish that could continue,” said Chelsea. “I mean, I know not everything lasts forever, but that was a really good program that was very helpful to me… Especially being a young mom.”

To support herself and later her daughter, Chelsea found employment at a local hardware store where over the course of five years she worked her way up to a managerial position, taking care of the store front as well as 400 units. Despite constant employment, Chelsea encountered many bumps in the road from homelessness to lack of transportation.

When she was referred to work with Santa Maria’s Financial Coach to steady her finances, Chelsea took up the opportunity. “Before it was paycheck to paycheck, barely making ends meet, and now I have two separate banking accounts — I have savings accounts… I’m in a lot better place financially; I’m managing money a lot better. I can pretty much handle it now.”

Chelsea participated in the Twin Account program offered through Santa Maria’s Workforce Development program and over the course of a single year was able to increase her credit score from nothing to 631, along with a rise in her net worth and net income. The next big step on her financial journey is to become a homeowner. “I want to invest in something — make it mine and make it what I want.”

When asked how she would define success, Chelsea refers to the way she has been able to raise and provide for her daughter. She also points out that success is “not necessarily what you own or what you have, or what kind of car you drive, but what you do besides money…. How you love other people and how you help other people in times that they need it.”  With a bright smile and a bright outlook, Chelsea encourages anyone in the midst of their journey with Santa Maria to keep going and have faith in its capable team that is there to help them in the times that they need it. 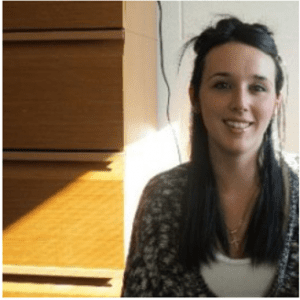