At 19, Ashley had a job, her own apartment, and a baby on the way. A child of 10, Ashley had experience with a household of children, but was in need of assistance when it came to raising a child of her own. After Kari was born, Ashley moved in with her mother. Struggling to find a more stable and suitable living situation, Ashley was reluctant when she received a call from Santa Maria’s Every Child Succeeds (ECS) staff. Ashley and Kari received their first home visit with ECS staff Ruthanne, who helped push Ashley to receive her GED through Santa Maria’s Literacy Center West. After Ruthanne retired, Ashley worked with ECS staff, Joanne, who Ashley built a strong relationship with. “Joanne was like a big sister,” said Ashley. “She was understanding, helpful, great to talk to, and supportive.”

Promoting Our Preschoolers (POP) staff member, Regine, helped Ashley to know about eye and hearing exams for Kari, and once Kari was of age, helped Ashley enroll her into Santa Maria’s POP Program, which helped Kari prepare for preschool. Regine has continued to be a support system for Ashley over the years. Ashley recalls, “Kari went through a bad chewing phase and chewed on everything. Regine informed me it was a sensory issue, not bad behavior, and provided me with online resources to help.” With Regine’s support, Ashley discovered “chewlry” which Ashley purchased for Kari and used to teach her what was acceptable to chew on and what wasn’t.

Regine assisted Ashley with looking at preschool options for Kari who will be graduating from Santa Maria’s POP program this August. After discussing Dater Montessori with Regine, Ashley applied through the lottery program and Kari was accepted to begin kindergarten in the fall. “Ashley was always a joy to work with,” said Regine. “She was eager to engage with Kari and do whatever she could to make sure Kari had every advantage possible. From engaging in home visit activities to enrolling her into preschool and selecting a great school for Kindergarten, Ashley was always looking out for what was best for Kari.” 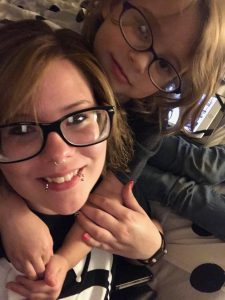