Lori was referred to the Promoting Our Preschoolers program through her Start Strong home visitor, JoAnne, who is based at Santa Maria. Lori has five children, one of whom has a disability, and she was looking for some support.

She worked with her Promoting Our Preschoolers home visitor, Jaime, to create a Learning Plan for Jeremiah, age 4, and Kaleb, age 3. Jeremiah and Kaleb are already meeting many of their first goals. Jeremiah’s first goals were to write his first name and identify letter sounds and numbers 1-20. Jeremiah is now writing his first name and has identified his numbers 1-10.  Kaleb’s first goals were to identify and spell his first name, use his words rather than point or cry when he wants something, and cut with scissors. Kaleb is now using his words more, is able to identify his name, and cut with scissors.

Through her involvement with the Promoting Our Preschoolers program, Lori began to attend parenting groups offered through Santa Maria, including both the “Mom’s Talk” & The Mom’s Club Women’s Groups at Santa Maria’s Griswold Center. She has made many new connections and become a leader among the other mom’s in the group. She now feels like she has support and is empowered to give support to other parents in the group.

During visits and after talking to Lori, her POP home visitor noticed that Lori was concerned about the conditions of their housing. She felt that it was not safe and worried about the possibility of not having a safe place to live. Lori’s home visitor referred her to Stable Families- a housing, income & school stability program at Santa Maria Community Services

Amelia, a case manager with the Stable Families Program, invited her to Santa Maria’s Tenant Education class. The class offers invaluable information on renters’ rights & housing. Afterwards, Lori was able to get her landlord to fix some concerning issues at her house. Lori also became motivated to find new housing for her family. She signed up for subsidized housing, put an application into Habitat for Humanity and found her family a new home in Price Hill to move into. Based on her home’s location, Lori’s children were now assigned to a new public school & instead of sending her kids to the failing school, Lori used information she received through Santa Maria staff to put her kids in a private school close by her new house!

Along with learning about quality affordable housing, she also began working towards stabilizing her finances.  She was referred to the Financial Coach at Santa Maria through her Stable Families Case Manager, & open a credit building account. She also used People Working Cooperatively to help her get a more energy efficient appliance for her home.

By addressing multiple issues with her housing and family, she will have the stability she needs for her children to have a better chance to be successful in school! 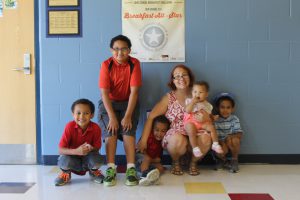