In 2015 both Donyell and Savonne were enrolled in Workforce Investment Opportunity Act (WIOA) CCMEP (Comprehensive Case Management and Employment Program) at Santa Maria. Donyell had worked hard to overcome a great deal of adversity and significant obstacles from his past: in 2014, Donyell was involved in a shooting in Walnut Hills which led to felonious and aggravated assault convictions. He enrolled in WIOA in 2015 with two goals: to obtain his High School Equivalency (HSE) and to get a job. Savonne and Donyell were in a relationship together, and they worked hard to raise their young daughter. Donyell encouraged Savonne to participate in the program so that she could get assistance in working towards her goal of becoming a nurse.

Donyell was determined to work on his goals, and to turn things around. He attended classes regularly but often had to put studying on hold to provide for his young daughter. In 2016, WIOA connected Donyell with Building Value (social enterprise of Easterseals that salvages reusable materials for sale to the public). Donyell worked 40+ hours a week at $8.10 per hour and worked hard to obtain his construction certifications. He was persistent in showing up to work at minimum wage for over a year to prove himself. Donyell had difficulty finding a permanent position with a construction company (outside of Building Value) due to his background, but he was determined to prove himself and to prove that his record did not define him or his work ethic. Building Value was persistent in working to get Donyell hired on permanently at a construction company, and at the beginning of 2018 year he was hired full-time at DBGC Construction company earning $15.00 per hour. Donyell is still enrolled in the CCMEP program and is currently studying to obtain his High School Equivalency through Santa Maria’s Education Program. Over three years of participation in Financial Coaching, he went from not having a credit score to being scored.  Donyell also discovered had identity theft on his credit report.  In working with Santa Maria’s Financial Coach, those accounts were disputed and over $1,500 in medical collections were deleted from his credit report and he paid off his car loan which assisted in a net worth increase of over $10,000 over the past year.  Currently, he is in a credit building product to continue increasing his credit score.

Also enrolled in CCMEP at Santa Maria, Savonne received an Individual Training Account (ITA) in 2017. ITA’s are provided by Hamilton County Jobs and Family Services and are aimed at covering the costs of specific short-term career trainings that are in-demand.  As a result of receiving ITA, Savonne obtained her STNA/PCA (State Tested Nursing Assistant/Patient Care Assistant) certifications and she is working as a State Tested Nurse Assistant (STNA) at Bethesda North. Savonne still participates in our program, and her goal is to get into college to attain nursing degree.  She recently met with a contact from the Educational Opportunity Center at Cincinnati State to get started on enrolling into college.  Savonne recently entered one of our credit building products called Twin Account, a credit builder loan, to increase her credit score.

Donyell and Savonne are still enrolled with Santa Maria and they are participating in the Wage Pathway program. This is a pilot program through the State of Ohio that provides incentives to youth for reaching specified employment retention milestones. They continue to meet with the Santa Maria financial coach to work towards their goal of becoming homeowners, and they both meet with their workforce coaches regularly to keep working towards their goals. As a household, the couple has built a solid foundation by achieving a positive net worth and liquid assets of over $2,000. They recently applied to the Homesteading Program, an alternative path to Homeownership, and were referred to Working in Neighborhoods as the next step to prequalify. The family is one of Santa Maria’s 50 Families, a recent two-generation effort to focus on getting families connected to services in order to reduce poverty. Savonne and Donyell’s daughter will complete her first year of pre-school this year, and she is no stranger to Santa Maria as she often is able to join dad when he attends tutoring for his GED.

Donyell recently passed one of his GED tests, and he is determined to graduate this year in May 2019. This couple got married in May of 2018, and a few of our staff were able to celebrate this monumental occasion with them. 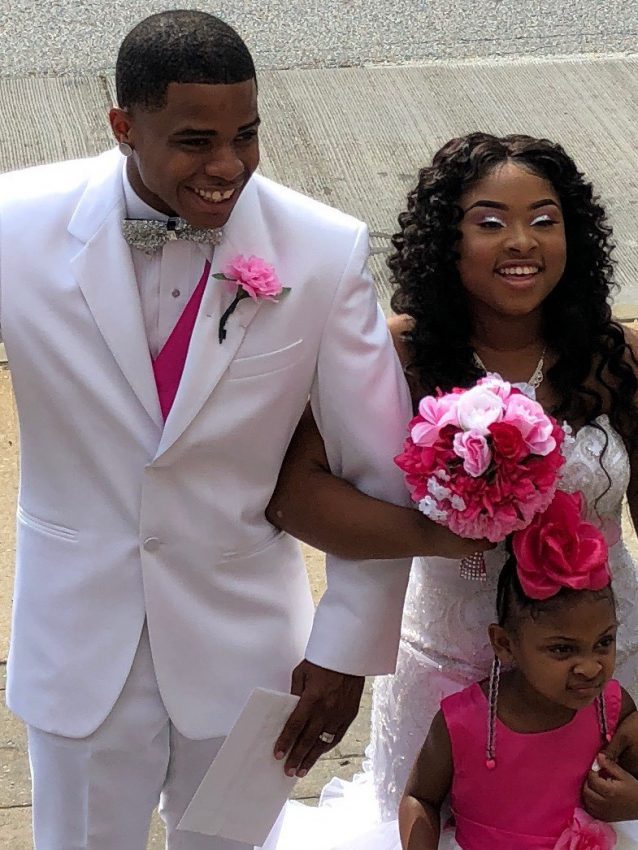