In the summer of 2011, the Cincinnati Health Department was concerned about three year old Desire Jackson Hawkins because of high lead contents at her residence.  She was referred to Santa Maria’s Promoting Our Preschoolers (POP) Program and shortly after, the Health Department moved the family, including Desire, her mother, Desirae, and her two siblings, to a new home.  Due to the relocation, it became difficult for Santa Maria’s POP home visitor, Jaime, to keep in touch with them.  Fortunately, this story did not end there.

A year later, Jaime saw Desirae at Carson School’s Open House.  Desirae was excited to see her daughter’s home visitor, and Jaime quickly resumed services in order to help the family.  Desirae was experiencing issues with finding a good home within her budget.  Desire had issues with speech and language development, most likely due to the lead content in her previous home.  The two siblings were also beginning to have behavior and academic problems in school due to the instability in the family.

As Jaime continued her work with Desirae and her children, the family soon began to improve.  Desire was meeting 2-3 times a month with her home visitor.  She was a happy girl, but was quiet and became quickly frustrated at her inability to communicate at times.  Her difficulties with language became the focus of her treatment.  At the beginning she was able to receive a speech screening and weekly speech therapy sessions through the Supporting Partnerships to Assure Ready Kids (SPARK) program. Thanks to Jaime’s hard and targeted work, Desire is now enrolled at Cincinnati Union Bethel in Camp Washington with an Individual Education Plan (IEP).  Being able to enter school with an IEP will assure Desire receives the assistance she needs in a large classroom full of kids with a variety of different needs.

Desirae began working with Santa Maria’s Stable Families Program through the Price Hill Financial Opportunity Center (PHFOC) in February, 2013.  Before enrolling in Santa Maria’s programs she and her three children lived in a two bedroom apartment without a lease.  The apartment was littered with broken glass and was missing windows in some rooms.  In addition, utilities would be shut off at random with no warning.  At this point the family barely lived there and instead did a combination of nights at shelters and couch surfing at friends’ homes.

Through classes and meetings with the staff at PHFOC, Desirae was able to find new housing with a landlord that Santa Maria knows and trusts.  Recently, on June 15th Desirae graduated from the Stable Families Program.  Once she has all three children in school, Desirae intends to go back to school herself.  She attributes her success and the successes of her children to Santa Maria Community Services. 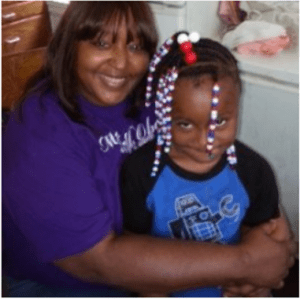