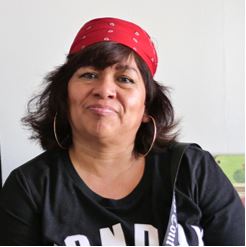 Maribel moved to the United States from Mexico nearly 20 years ago. As an immigrant and single mother of 4 children, Maribel has faced many challenges throughout her life in the US. When Maribel first contacted Santa Maria in 2016, she was struggling to communicate with her landlord regarding issues with pests and plumbing. “I had problems and someone told me to come to Santa Maria, that someone here could help me,” said Maribel. Molly Swaidan, a Santa Maria Bilingual Case Manager, helped Maribel enroll in the agency’s Stable Families Program. “It’s 18 months of case management where we set goals around housing, employment, income, and stability,” explains Molly. Maribel says the program helped her look for a new apartment and helped her become more stable.

Presently, Maribel balances raising her three youngest children (boys, ages 15, 10, and 9) with her job of cleaning houses – a huge success after being unable to work to care for her children. She describes herself saying, “I’m not a perfect mom, but I’m a good mom. I take care of my kids, and I’m always with them.” When her first son was born, Maribel was living in a Kentucky homeless shelter with her 7 year old daughter. Reflecting on her time there Maribel remembers feeling alone with no other Latinas to connect with. At the time, neither she nor her daughter could speak English. Maribel didn’t know how to drive or take the bus and struggled communicating her needs, even when she was having labor pains. Over time, Maribel managed to work and save enough for an apartment with help from shelter staff. While things were looking up for Maribel, her infant son suffered a tragic accident.

At just four months old, Maribel’s son experienced a traumatic brain injury and was hospitalized for two months. A fall off a bed left him with hyperactivity issues, slowness, and rapid personality changes throughout his life. Recently, Maribel’s middle son, age 10, was diagnosed with schizophrenia which has led to frequent panic attacks and shaking. Her youngest son, age 9, suffers a mental delay, hyperactivity, and speech and sleep problems. Having three children with special needs has required countless doctor appointments, therapy sessions, and school meetings. Without a car, Maribel takes the bus to each of these. While she has been fortunate to receive some in-home assistance with her youngest son and medication for her middle son, her oldest son receives only limited assistance.

Though Maribel and her family have faced many challenges, her involvement in Santa Maria has placed her on a positive path. Maribel joined the Spanish-speaking Women’s Group which gives members an opportunity to engage in community with other Spanish-speakers and learn cooking, gardening, parenting skills, and more. The group helped Maribel feel a sense of community that she had not experienced while living in Kentucky. “When I come to Santa Maria, there’s a lot of Hispanic people,” said Maribel. “And when I come to the group there’s a lot of Hispanic women. I feel better here.” When asked about her future goals, Maribel stated, “I want to save money to be able to buy a house.” Molly seems to have no doubt that she will reach her goals saying that, “she’s very strong,” to which Maribel replied, “I have to be.”

Molly calls her work with Maribel “rewarding” and says the two “have a friendship at this point” and are “almost family.” “Maribel is an incredible mother who is doing the best she can while maintaining a positive environment for her children,” says Molly. “She doesn’t miss her group sessions with Santa Maria, and is open to sharing her struggles with the group.” Maribel’s first child and only daughter, now grown, recently moved back to Cincinnati from the East Coast with her child, Maribel’s’ granddaughter. After transitioning to four different schools throughout first grade, Maribel’s youngest son recently completed his first full school year and passed second grade. Her oldest son is also experiencing success in school making As and Bs. Maribel continues to participate in Santa Maria programming and live her life for her and her children. With the help of Santa Maria, she is currently on track for achieving her personal goals including becoming a first-time home buyer, among others. “She is resilient,” adds Molly. “She is not giving up at all.”