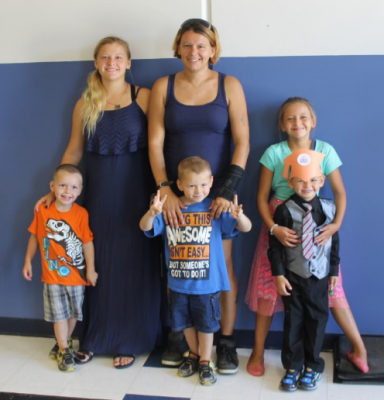 In the  mid-2000s, Amy was struggling to find stability. She was maintaining a job at Gold Star Chili while trying to bring herself and her three-year-old daughter, Elizabeth, out of an unsafe living environment and into reliable housing. Elizabeth was also close to starting kindergarten, and Amy was unsure how to set her daughter up for success.

Every morning, while walking to work, Amy would pass by Santa Maria Community Services. One morning, as she as walking past, she noticed a group of women handing out flyers for a new program – Promoting our Preschoolers (POP). Amy excitedly let them know that she had a daughter who was supposed to start kindergarten the next year, and she needed help.

Elizabeth was immediately enrolled in the POP program, which works with children, ages 3-5, and their families to get children ready for kindergarten. Amy and Elizabeth’s case manager, Jaime, began regular home visits, providing Elizabeth with lessons that would help her cognitive development and get her ready for what would be expected in kindergarten. Jaime also helped Amy learn how to take over the lessons and continue Elizabeth’s education once the home visit was finished.

The idea behind the home visits is keeping the parent involved as much as possible. “We don’t really want it to be just us teaching the lesson to the child, we want it to be something where we’re modeling, and then the parent can take over,” she says. “We are not going to teach this child by going once or twice a month and giving a lesson. We want this to continue in the home afterwards.”

Elizabeth says that POP really helped her mom because she was no longer the only teacher for her children.  With the help she and Amy received from POP, Elizabeth began to excel in school.

“I definitely believe I got that head start, and it has helped in the long run,” she says. She adds that, without POP, it would have been much harder to get to where she is now.

Today, Elizabeth is a junior at Dater High School, and is poised to be the first person in her family to go to college. She is in the process of meeting with her school counselor to begin taking classes for college credit. After graduation, she plans to attend either the University of Cincinnati or Cincinnati State and pursue a degree in hospitality management.

“It’s going to feel amazing,” she says about being the first in her family to attend college. “I’ll be living the dream.”

Jaime adds that she will be with Elizabeth throughout the process. “The fact that she wants to be the first in her family to go to college just makes me so proud,” she says. “I am going to be there with her every step of the way because I know she can do it.”