As a young teenager, Billie was thrust into an unfortunate situation that lead her to take on the responsibilities of adulthood far sooner than expected.  She was working an unfulfilling job, and after being evicted from her home, was desperately in need of a place to lay her head at night. That was when “out of legit desperation,” as she puts it, she called United Way 2-1-1 and was referred to Santa Maria Community Services.

As soon as she attended orientation, Billie began seizing opportunities to help prepare her for a better life.  Santa Maria’s Tenant Education class, which teaches clients about their rights and responsibilities as a tenant, how to communicate with a landlord, and budgeting, peaked her interest and she signed up right away. After completing the class, Billie found herself in a tight spot where although she could afford rent for an apartment, she could not afford the security deposit without taking out a loan. At this point, Santa Maria stepped in and removed her barrier to housing by paying for her deposit. “They helped me find my apartment.  My home, my beautiful home that I have today, is because of them.”

Billie did not stop there. During the Tenant Education class, she was introduced to Santa Maria’s Financial Coach and decided that since this was the first time she was paying her own bills, she would benefit from some financial guidance. After completing one-on-one coaching, she acquired the skills she needed to work out her own budget.  Additionally, when new transitions occur in her life in the future, such as changing employment, Billie knows there is help nearby. “I’ll go back to the financial coach and then we’ll sit down. It’s like ‘Okay, now you’re making this much money’, and then we can go over a new budget.”

Before long Billie was feeling financially aware and stable; she had a home and a car, but one thing was lacking.  She did not like her place of employment. Therefore, she began working with our Employment team and attending employment workshops. For Billie, the certificates of completion she earned from each class she attended helped boost her confidence when applying for new jobs.  Of the encouragement she derived from the staff, Billie noted, “I just don’t think anybody at Santa Maria realizes how much their support and them believing in me means to me.”

In her position as a Public Ally, Billie was matched with a non-profit organization where she apprenticed for nine months as a Job Search Assistant.  She did such a great job that in August of 2016, she was offered a job at Cincinnati Works as an Employment Coach.  In her position, she is serendipitously turning the tables to help others through the employment process she herself emerged out of. With a big smile, Billie will tell anyone who asks, “Now I’m the employment coach.”

In describing success, Billie stresses, “It’s not about the materialistic things. it’s about when you wake up every day, the way you perceive yourself. Coming from two years ago, I now live in a tiny little apartment with my dog and a little hoopty car ’97, but I’m happy, I’m on the right track, and I’m where I want to be.”

When asked to give some advice to others coming through Santa Maria, Billie says, “You have the resources. Utilize them. I feel like when I went in there every day looking for job search assistance, they gave me the utmost support.” Billie is currently making a living wage.  She has achieved net income and net worth gains and has moved off of public assistance (food stamps) and has an emergency savings which she plans to maintain.  She is also saving for a new car and her first vacation, and is planning to attend college in the near future. 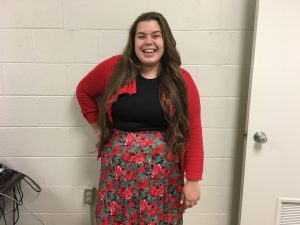